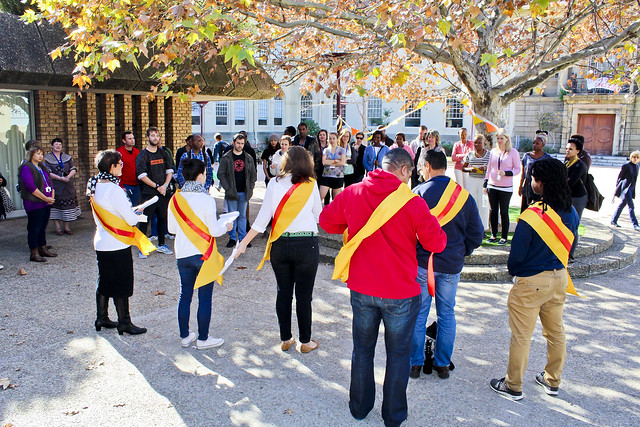 “The Amazing Race event was planned as fun activity (with a competitive edge) to bring people together for a team-building experience that would also facilitate engagement with language, communication and relevant social issues at the university.” she explains.

The event, emulating the global television series, pitted teams against each other on a race across UCT chasing clues and participating in challenges. It kicked off amidst loud music in the student plaza at Health Sciences on Friday 27 during lunchtime. Six excited teams competed for an all-expenses-paid dinner for the winning team, sponsored by GOLD restaurant- The Dean’s Dream Team, The 4 Bases, Team SM, The Masters, ESXS and The Motley Crew.

With the first clue in hand, the teams enthusiastically raced off in different directions to identify an artwork on campus highlighting the HIV/Aids struggle.

Once they had successfully translated a phrase on the artwork it was off to the Library to get back in touch with the roots of medicine. From here, teams headed to upper campus, with team ‘4 Bases’ managing to catch a Jammie Shuttle just as it was leaving, giving them a significant lead on the other five teams.

Once complete, the teams had to take a selfie in front of a road sign on campus baring the author’s name with the hash tag #FHSLanguageFest. Next, teams had to engage with the renaming process by proposing a new name for the Beattie building and submitting it to the renaming committee (who knows, maybe one of the teams may end up being credited with renaming the Beattie building!).

Following this, teams were sent to All Africa House, where they had to brainstorm strategies that staff and students could use to overcome language barriers in the classroom. Next, it was time to shake a leg at the School of Dance, where teams had to learn and then perform a short piece of choreography. The final activity was a team quiz on the lawn of the Graca Machel residence. Teams were warmly welcomed back to Health Science at the MAC Club. Team 4 Bases (Tarryn Shaw, Amber Ross, Malebo Malope & Kalinka Popel) maintained their early lead and came in with a strong win, followed by the Motley Crew in second place.

A snap survey of the exhausted but elated participants showed them to be full of praise for the level of challenges (some more frustrating than others), and the way this connected people in the Faculty; Many expressed the view that it should become an annual event.